An evening of silent cinema with live piano by Stephen Horne

UNTIL COVID-19 RESTRICTION ARE EASED.***

Purchased tickets will be refunded

After the films, Stephen Horne will take part in an after show interview with Simon Tyler of Creekside Vinyl in Faversham.

Stephen has long been internationally considered one of the leading silent film accompanists. A house pianist at London’s BFI Southbank for thirty years, he has played at all the major UK venues and recorded music for many DVD releases of silent films. Although principally a pianist, he often incorporates other instruments into his performances, sometimes simultaneously.
www.stephenhorne.co.uk 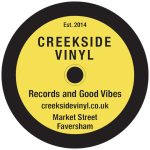 Creekside Vinyl
Faversham’s popular record store, the place in Kent to go to for new records from a whole range of musical genres.